FREE shipping on orders over $80

You may or may not have heard of Tiwanaku (or Tiahuanaco/Tiwanacu). It is a major pre-Columbian civilization located in Bolivia known for its ruins and now listed by UNESCO (United Nations Educational, Scientific and Cultural Organization) as a World Heritage Site. It was built almost 13,000 feet above sea level, making it one of the highest urban centers ever constructed. The people were skilled engineers and masons, producing impressive stone buildings and monuments. A civilization way ahead of its time! However, as time went by, it collapsed and the city was abandoned, but their monumental stone art and architecture survived and continue to impress the modern-day visitor with their timeless appeal. 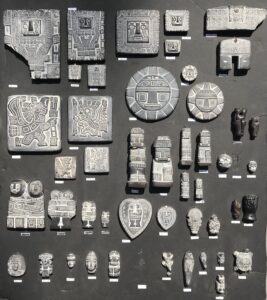 Why the mini history lesson? Well, in the early years of 1990s, we befriended a ceramist and his family. From where? You guessed it! From the town of Tiwanaku, Bolivia. This family made amuletos, or good luck charms, by collecting clay from the nearby hills, pressing it into their own handmade molds, then firing them in their backyard oven, fueled by their sheep herd’s poop! Their amuletos consisted of ekkekos (the traditional god of luck and prosperity), idolos guarding the village church, a replica of a nose from a found pitcher, an exact copy of quartz chacapuma, Chavin de Huantar depictions, and many more items inspired by the Tiwanaku ruins! They were beautiful and the detail was incredible. So, we did the only thing that seemed right: we made a small business with this family and their beautiful, handcrafted amuletos!

It wasn’t easy. It was actually quite complicated. There was just one phone in the village phone center that we used to contact the family to place our order. Calling long distance, the operator at the phone center would answer and say, “Los gringos llaman para los Choques?” (“The gringos are calling for the Choques?”) Then we’d hand up, he’d run down the street to get the young son, because he could write, and we’d call back and place our order!

That was almost 30 years ago! We lost touch with this family. But things have a funny way of working out. While Toby was out in the Cultural Museum in Bolivia, he was recognized by a young man. That young man was no other than the boy who would write down our orders. He was all grown up!  He recognized Toby at the Cultural Museum and reintroduced himself!!! While catching up, he said with the money they made from selling to us, he and his siblings were able to get an education and jobs. Two have become teachers and one is a soldier and museum guard. So important to know we are making a difference and not causing too much trouble!!